This article comes to us courtesy of Wilhelm Arcturus, in Goonswarm Federation, originally posted on The Ancient Gaming Noob blog.

CCP has released the Monthly Economic Report for July 2018 so we can see what impact moving off to war has on the Imperium’s economic engine in Delve.  So I will be comparing this to the June report which was the last peacetime period.

We might as well dive straight into mining output, as that is where Delve and the Imperium dominate every month.

And while, in the past, I have had to point out that changes in output might be related to the price in minerals from which the measure is derived, this month the economic indicators show that mineral prices were flat, even rising ever so slightly as the month moved on.

So there is the cost of war.

Regions in northern null sec, where a lot of the war is occurring, suffered downturns as well, save for a few like Branch that stayed stable or even rose a bit.  There is no bar chart this month so we cannot see the relative rankings easily, but even a diminished Delve is still dominant.

Then there is the NPC bounty output to look at.

As with mining, NPC bounties in Delve were down.  In June the number was 11.2 trillion ISK, but in July that number sank to 7.5 trillion ISK.  Unlike mining, which has to be sold or used in manufacturing to be turned into ISK, this drop saw 3.7 trillion ISK less flowing into the pockets of Delve pilots, with a corresponding reduction in taxes for corporations.

I wish that the bar graph for this data had been included… and I am too lazy to make one myself… because you could more easily see Branch, where many northern players have gone in order to escape the war and keep krabbing, creeping up in value compared to Delve.  July saw Branch hit almost half of Delve’s number, up from less than one third in June.

The reduction even saw a slight change in the sec status balance of bounty payouts. 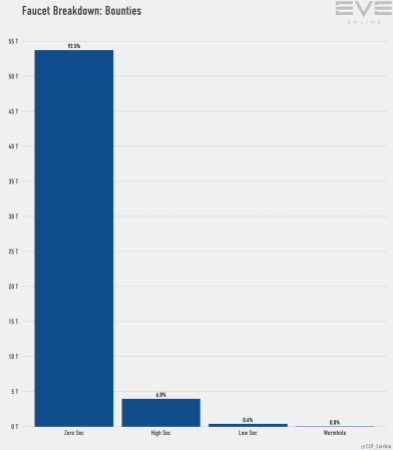 Instead it was Jita that saw the big boost, supplying the northern war front.  Trade in The Forge was up by nearly 50 trillion ISK in July.

At least we have the bar graph to illustrate the dominance of The Forge, home of Jita. 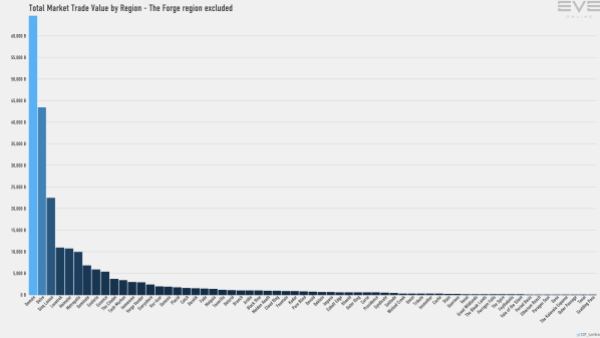 Without The Forge you can see Delve holding steady in third place behind Domain, home of Amarr, the second trade hub of New Eden.

When it came to contracts Delve again stayed steady while The Forge surged.

That surge may be related to the war, at least indirectly, but seems likely to be more about mutated modules from Abyssal space as they are becoming more readily available and can only be traded via contracts.

Then there is production. 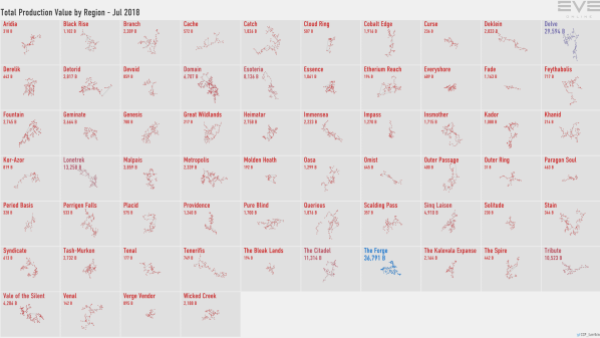 Here again The Forge surged, but Delve sank some.  This may be due to a shortfall of minerals in the region.  I know we were already importing minerals from Jita to support production, but with the drop in mining there have been requests from leadership going out asking that we make sure and list minerals in the Delve market because they are needed.  This was a key speaking point for The Mittani during the most recent coalition fireside chat.  Minerals and ice products are in high demand.

And then there is the war time chart, destruction by region.

Since the report lags by a month we are only now seeing the numbers for the battles at UALX-3 where a Keepstar was destroyed along with hundreds of capital ships in two consecutive bouts.  That boost the Tenerifis number by about 3.3 trillion ISK.

In Delve the numbers were up a bit as those who kept on ratting and mining while the super capital umbrella was elsewhere paid the price.  In The Forge however ganks were apparently down a bit compared to June.

And, as usual, I will close with the regional stats chart that puts a chunk of the data into one chart. 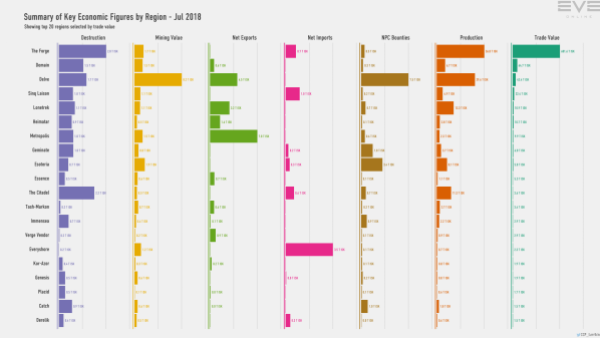 The July numbers reflect only the start of the pan-null sec war, with the opening struggles in the south.  Already in August we have had two major battles with losses measured in trillions of ISK, so next month’s report should be interesting.

Meanwhile the shortfall in mineral and ice product production may send the prices upward.  Something to keep an eye on come next month’s MER.

You can find the July 2018 Monthly Economic Report and all of the charts it provides, along with the raw data from which they were made, over on CCP’s site under Dev Blogs.

Ashy in Space – How to Start a Corp in EVE Online

EVE Online and the EVE logo are the registered trademarks of CCP hf. All rights are reserved worldwide. All other trademarks are the property of their respective owners. EVE Online, the EVE logo, EVE and all associated logos and designs are the intellectual property of CCP hf. All artwork, screenshots, characters, vehicles, storylines, world facts or other recognizable features of the intellectual property relating to these trademarks are likewise the intellectual property of CCP hf. CCP hf. has granted permission to New Eden Report to use EVE Online and all associated logos and designs for promotional and information purposes on its website but does not endorse, and is not in any way affiliated with, New Eden Report. CCP is in no way responsible for the content on or functioning of this website, nor can it be liable for any damage arising from the use of this website.
Privacy & Cookies: This site uses cookies. By continuing to use this website, you agree to their use.
To find out more, including how to control cookies, see here: Cookie Policy
© Newsmag WordPress Theme by TagDiv